If you did a mag-dump at 600yds, how many hits would you get? if the answer is "all of them", we need you on our team!

NTIT National Trophy Infantry Team match or "Rattle Battle" is a match that culminates the National Matches at Camp Perry OH. It consist of a team of 6 shooters, 8 “silhouette” style targets, 2 coaches with binoculars and 384 rounds of ammo. The ammo is divided between the shooters, not necessarily evenly.

Shooting starts at 600yds, them the shooters move to 500, then 300 and finally 200 yds. At each distance there is 50 seconds to shoot. Only hits count and hits at longer distance count more points than closer. And targets with 6 or more hits have some bonus points added to the score so you really need hits on all 8 targets. Normally, two of the 6  shooters shoot at 2 targets each.

The 6 shooters only carry their rifle and loaded magazines, and wear the coat and glove. No mat, stool, scope, etc. The two required coaches (one of whom is team captain) can use only 10x binoculars. A score keeper from another team follows behind with a scope. Teams must arrange someone to follow 100 yds back to get brass.

The match starts by laying out the ammo on a table at the ready line to be counted by the range official. The team uses exactly 384 rounds, (origionally it was 2 cans of .30-06 M2 ball on 8-round M1 clips!) today teams provide their own ammo. After the ammo is counted, the shooters load their magazines and stand by.

When called to the line, shooters have a 3 minute prep period to get into the prone position at 600 yards. There are no sighter shots, only coaches looking for traces in the binoculars.

Seconds after the command "load and be ready",  the targets come up, shooters have 50 seconds to shoot as many shots as they can!

After 600 yd targets are scored, the whole firing line marches together to 500 yard line, and immediately the command is given. Again, after scoring at 500 they march to 300 and then later to 200 yds. Then they march to the pits to work targets for the next relay.

There is a team strategy to take advantage of the point system. Hits at 600 yds are worth so much more that teams try to get as many shots there and at 500 as possible sacrificing 300 and 200 yards. This carries the risk that if one is shooting rapidly, one is more likely to miss. A miss counts 0 points at all distances. So a strategy is to shoot as many shots as the members can accurately shoot at 600, then 500 saving only a few (6 per target) for 300, and none for 200 yds.

There are no alibis. If one shooter has a failure, his ammo can be distributed to the other members, so ammo must be interchangable.

One failure at 600 yds can drop so many points as to cost the entire match.

So, skill is needed, as are good zeroes, but so is luck.


Konrad's 14 minute video about it https://www.youtube.com/watch?v=_kweoOKvMh0 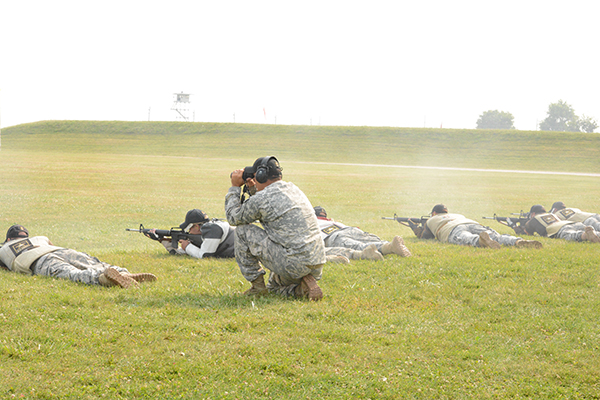 "Load and be ready!"